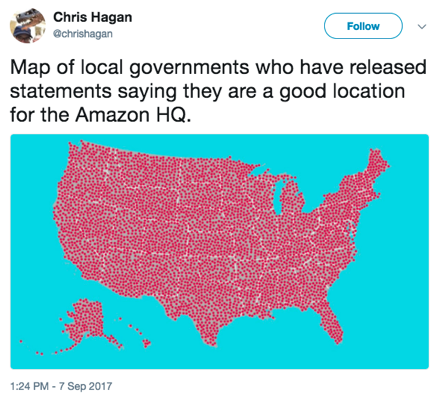 This guy nailed it. Everyone wants the new Amazon headquarters. And, boy, do we hope that someday we get to see what those RFP responses looks like. There will be some doozies.

The reality, of course, is that of the 700 dots on that map only one will be chosen. And, it’s probably also true that there are only 5-10 viable locations. But none of that reality will stop municipalities everywhere from throwing their hats in the ring.

There’s already a bunch of solid analysis and commentary out there about who the winner might be. The New York Times says Denver is the most likely winner. CNN Money picks eight likely suspects. Bloomberg says Boston is a frontrunner. It seems likely, even though Mayor Tom Barrett has already let Amazon know we’re interested, that most everyone would believe that Milwaukee is probably not a realistic frontrunner at this point.

And, of course, there’s plenty of thought that this may be a contest a city shouldn’t want to win.

In some respects, we’re not as interested in where Amazon ends up as we are in thinking about how municipalities will present themselves. Willy Wonka has announced his contest. But unlike in Roald Dahl’s classic, it’s not sheer luck (and buying power) that will yield a golden ticket. This time we know the winner gets the factory, and it’s the contestants’ job to demonstrate they’re Charlie Bucket.

It may be true we’re not likely to win. But we think we should try. We think that going through the process of thinking how our city can stand above the rest can empower us as we grow and pursue other opportunities. And, we think Amazon could absolutely, justifiably, choose our region.

But, let’s be real. The City of Milwaukee, on its own, can’t possibly support an Amazon HQ with 50,000 jobs. We don’t have enough employees available, much less engineering and tech types. We don’t have the winds of meaningful economic expansion filling our sails. We don’t seem to have a local government particularly inclined to get involved in deep pocketed financial incentive. We don’t have an effective public transportation network.

Enough negatives. What do we offer?

We have incredible natural resources. With notable exceptions, we enjoy a terrific quality of life at a moderate cost of living. We have an international airport. We have limited traffic concerns. We have over 1,500,000 people in the MSA. The city has 4 national colleges/universities and one strong technical college. We have commercial real estate with lower than average occupancy costs, and we may have some remarkable real estate near downtown. In fact, we check a bunch of the boxes in the RFP.

Those benefits are solid, but nowhere near good enough. And, here in Milwaukee and in our region, we seem to continue to wear blinders as to our incredible collective strength.

Milwaukee has at least two things we don’t pitch anywhere near enough: proximity to Madison and proximity to Chicago. To be clear, we do compete with both those municipalities. And we absolutely want to win (don’t start on the Cubs and Bears). But, our geographic proximity and our shared cultural baselines should establish the foundation for a remarkable package to present to the broader market.

Consider that Milwaukee is <100 miles from each market, and that the boundaries between them get fuzzier every day. Madison is consistently rated as one of America’s best places to live. Chicago is consistently rated as one of America’s great big cities to visit. Madison has an incredible educational base and educated workforce, a truly enviable biosciences critical mass, and state government. Chicago is a regional and national economic powerhouse and cultural center. Milwaukee is way better than people think for start-ups, things to do, jobs, and as a place to live.

Here in the Midwest we tend to think parochially. And it shows in the way we think and talk about Milwaukee. We don’t think that’s productive. Here in Milwaukee, we know that our residents like to go down to Chicago to shop. And we also know that Chicagoans like to come to Milwaukee for their businesses. Kenosha County is in Wisconsin and is already part of Chicago’s MSA. And Foxconn is coming to southeastern Wisconsin because of the Chicago / Milwaukee connection.

So why do we foment competition instead of embracing our collective strengths?

Yes, every municipality wants the next employer, employee and resident. But the reality is that until we express our collective strength to the market, we are contributing to a distinctly un-level playing field. And unless that tilts toward you it’s no fun to play. Chicago – do you always want to be judged by your state’s financial challenges? Milwaukee – do you always want to be thought of as nothing more than beer, cheese and rust? Madison – do you really want to be a mid-sized island?

And there are other issues each of these cities should be considering. The Millennials aren’t going to stay downtown forever. When they do move, they’re going to move based on lots of factors. Quality of life, quality of schools, quality of housing, cost of living, quality of employment… In the SE Wisconsin / Chicagoland megalopolis, we have ALL that covered like a golden ticket.

Even though we’re urbanists, we don’t think it’s necessarily a bad thing for cities that Millennials will move to the ‘burbs. There’s an inherent regional opportunity there: as folks move away from the center, they may choose to move toward another market: fuzzying the boundaries even further. Here in our megalopolis, that means a stronger opportunity for collective identity.

And, each city can retain their individual identity. To be very clear: Chicago can have the Bears. But they can also be everything great they already are. Madison can be quirky and a bio-science magnet. Milwaukee can be a cheaper version of Chicago. We all have incredible work ethic and quality of life. And, we are our own cities.

But together we offer so much more. Chi-Waukee-Son has over 12,000,000 people. Collectively, we boast ~225,000 students enrolled at colleges and universities. That’s an astonishing number of potential employees. And that doesn’t even include the ~200,000 in community colleges and technical schools.

Already, folks live in Milwaukee and commute to Chicago and Madison. And vice versa. Indeed, the drive from Milwaukee to Madison, while 79 miles in length, takes less time than the commutes within many of the country’s larger cities. And, with the fuzzy boundaries in Waukesha County and Kenosha County, households with two workers can easily have one employed in Milwaukee and the other in Madison or Chicago.

We’re also connected to the outside world in dynamic ways. The 4 airports serving the region handle over 8,725,000 passengers a month. Amazon picked the Chicago / Milwaukee corridor for their fulfillment center for good reason. We can handle a LOT of freight.

There’s incredible value hidden in plain sight here. Amazon must love the Big 10 as an employee generator. The Big 10 work ethic is remarkable, and our schools provide a terrific education. By and large, graduates of our great universities don’t act as entitled as those from terrific schools on the east coast. Many of us probably think we don’t deserve Amazon.

As a region we have employees, culture, geographic advantage, transit connections, and much more. In a lot of ways our economic base acts as if we’re an organized region. At the very least, the market extracts value from our proximities and our people (see Amazon fulfillment center). It’s high time for us to take ownership of our value proposition.

Amazon may or may not be the Chocolate Factory. But we are Charlie Bucket. We’re kind-hearted, smart, hard-working folks. We deserve the factory. 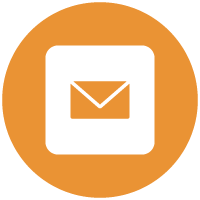